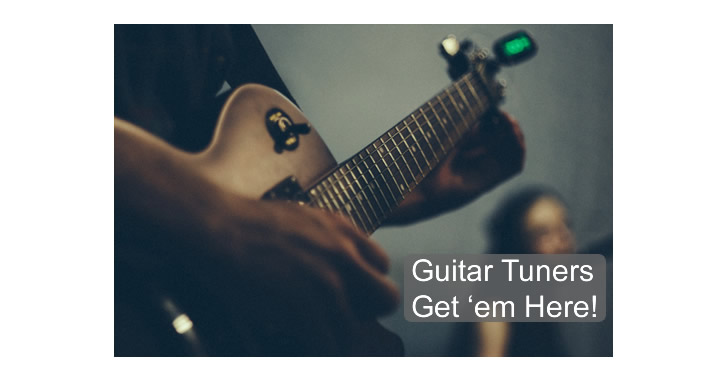 We would like to feature two guitar tuning devices for you in this section. The first is so easy on the wallet that there is simply no excuse for any guitar player to be out of tune. The second is more forward-thinking, with speed of tuning and live performance in mind.

Snark SN5X Clip-On Tuner for Guitar, Bass & Violin The Snark guitar tuner is revered among musicians who play any type of acoustic or classical guitar. It's ease of use and how it lets you micro-adjust each string suggests its price should be higher. But, the low cost is welcome. Battery life on a Snark is unmatched. I got a Snark for my birthday six or seven years ago and the same battery operates its LED output lights just like the day I opened the package.

What casual and professionals alike will enjoy about the Snark guitar tuner is its accuracy in picking up tones from places on the guitar neck other than the open strings. For example, your guitar might be in tune with an open E. But, then when you play that same note at the 12th fret, something just sounds a little off. Even if your guitar has some slight neck warping or just old strings, you will be able to use this device to easily find a happy medium where both locations are at very close to perfect pitch.

TC Electronic PolyTune 3 The phrase in guitar tuning to get to know in 2018 (if you haven't heard of it already) is Polyphonic. A polyphonic guitar tuner is more expensive than a Snark, but features a whole new way to tune that is just as accurate and much faster.

Instead of tuning one string at a time, you simply strum all the strings at the same time. The LED readout displays which strings are in tune while others are shown as below or above pitch.

This particular polyphonic tuner featured below is the ideal option for the performing musician or casual groups that get together occasionally to jam. Just plugin your guitar when you need a tuning, even if it's right in the middle of a song, strung all of your strings and adjust your tuning pegs according to the readouts.

With this emerging technology, and continued lower pricing, we suspect polyphonic tuners will replace more traditional tuners entirely. Why would you ever need to tune one string at a time when you can see all of the tonal readouts for your strings at the same time?

This user is the primary contributor to the Music Mates blog.